Lesson three: I gotta stand up for the real learning

A student I taught last year, Jose, came to me at lunch the other day flustered and confused.  He had gone to the library to get his school e-mail address (yes, I’m aware it seems a little odd to be giving these out in February, 5 months into the year).  They were distributed by grade level, so Jose went on the day the 11th graders were getting them.  He was told that he was not listed as a junior, but rather as a sophomore, and he should go and see his counselor.

His counselor was unaware that his status was as a second time sophomore and told him to check with me – apparently he had failed English and the system had automatically held him back in 10th grade.

I was shocked to hear this – while I didn’t remember his grades exactly, I definitely knew that he had not failed my class!

I cannot tell you exactly when Jose arrived in the U.S., how long he has been in North Carolina, or his legal status, but I can tell you that he is not yet completely fluent in English.  He can hold a conversation and make himself understood through writing, but while a student can become conversational in two or three years, it can take seven or more years for a student to test well if English is not his/her native language.

I dug out my gradebook from last year and found that Jose had ‘B’s and ‘C’s for his quarter grades.

I taught Jose in a collaborative English 2: World Literature/English as a Second Language class and he worked his butt off!  Rarely do we encounter kids who are so hard working, so eager, so determined, so respectful and so sweet.  Many students become frustrated – especially ones with extra challenges, but not Jose.  He attended after school tutoring three times a week, turned things in early so that he could re-draft before the final deadline, and would come at lunch for extra help. When not with a teacher, Jose was in the library or stairwells diligently working.

I checked with the counselor and an administrator – how could it be that a kid that worked so hard and earned achievement grades that reflected his efforts and progress was marked as a failure?

They couldn’t give me a definite answer.  The suggestion was made that perhaps he failed his EOC (End of Course State Test) and that kept him from being promoted to the 11th grade. Is that fair? I just can’t get behind that.

So yeah, Jose failed his EOC, but check out this sample from last year’s released prep materials:

City night sky
gives itself to me again
when I have so little left to receive it.
I am dark, crumbling
5 and you are rivers and trees away
searching your own night sky for a sign.
The strong gates of your heart
are wide open to me always, but,
if only.
10 So I wait, as seasons before, decades before,
fathers and mothers before me still inside
watch and listen.
Suddenly,
bamboo, bones, fiber, fences,
15 water, glistening koi,*

all the tiny rooms,
paths and places I hold your memories
relax
in audible, reverent wonder
20 at the fullness forming
on this horizon’s edge.

S1 Which line from the poem describes the speaker’s feelings about loving someone?
A “when I have so little left to receive it”
B “are wide open to me always, but”
C “paths and places I hold your memories”
D “at the fullness forming”

S2 Which word could replace reverent in line 19 of the poem?
A amazed
B respectful
C redundant
D significant

I tell you what: I could make a pretty good case for each of the options in sample question #1. And for me, teaching students how to make an assertion and support it seems so much more important than trying to get them to figure out the “best” answer out of these options.  What does this prove that they have learned? 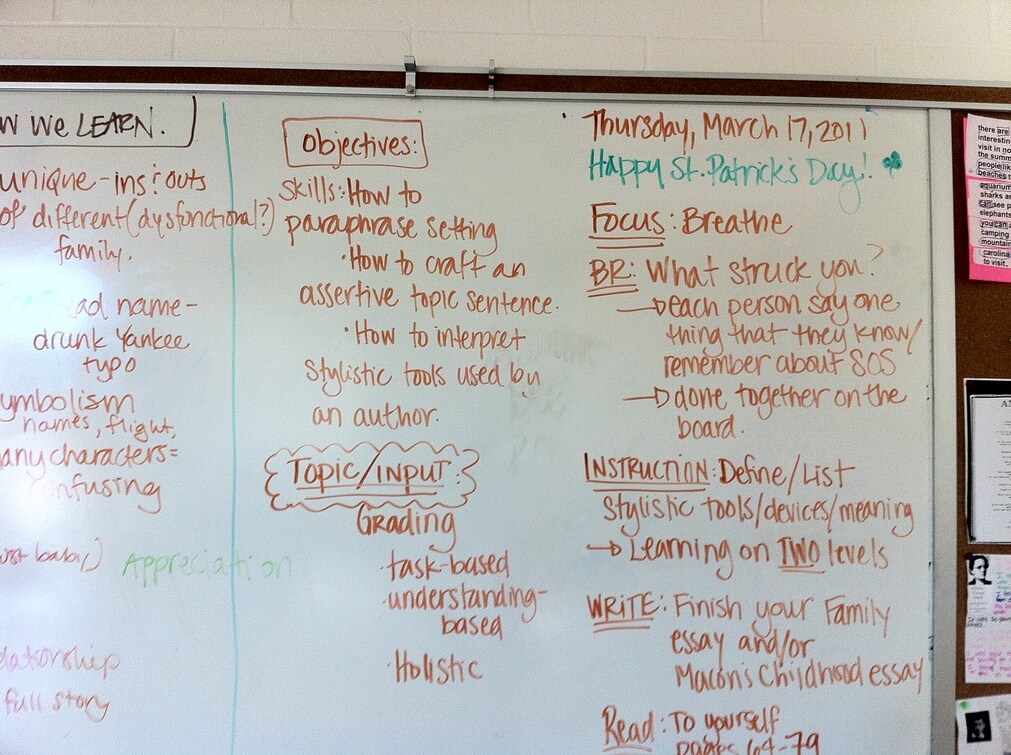 The qualities that Jose exhibits every day in the classroom and in his own learning journey is so inspiring and he deserves to be celebrated for his accomplishments.  His confidence and future should not hang on the balance of such convoluted questions.

I am not sure of my options, but I am going to look into overruling Jose’s grade from last year and changing it to something that better reflects the effort, process, growth and performance that he displayed in my classroom.  Fingers crossed that learning will trump testing in the end of this story!

If any of you want to take a stab at the answers to the EOC questions or are just curious, just leave me a comment and I will get back to you!