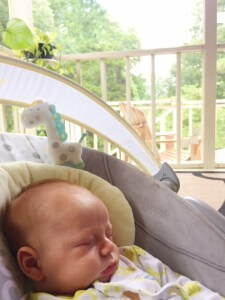 I have no idea what the temperature is outside right now, and it’s still very muggy, but it is well below the high 90s that have blanketed our days in the past few weeks.

There was a big storm last night – the first one to actually spook me in a while – I thought a tree may very well come down on us. The porch door flew open of its own accord; I considered moving into the basement.

But this morning, it was cool in the early hours. I would have rather been sleeping – the storm and a restless baby had left me bereft of the necessary REMs, but Cole and I were up before most others and we swayed with the Ergobaby and coffee on the drenched side porch. Few cars passed by. We could hear frogs from our creek (swamp) and birdsong. It was the first time in a long time that I wanted to be outside. I appreciated that, even as my eyelids pulled down on me.

Now, it is later in the afternoon, and the air is thick and heavy with southern damp, but we are on the screened porch. The rain comes back in short reminder-bursts, seemingly in a steady effort to keep the temperature down and the trees bowing under water’s weight.

Cole is happily, lazily, lounging in a bouncy chair, and I am able to write. He has not approved of being put down the last few days. Maybe I can get ten minutes before he stirs if I set him down asleep; if I’m lucky, I get thirty. It’s as though he struggles with sleep-surrender unless his body touches mine, preferably if I am erect and walking. There is nothing sweeter. Sleep and productivity for me have been staccato.

But now, out of the omnipresent air conditioning, sinking in amidst the swoosh of passing cars, the caws and hoo-hooos (who-whoos?) of large birds, the breath of blown tree limbs, and the intermittent patter of rain, he is soothed: his senses, I imagine, engaged and satisfied beyond what a sound machine provides.