The South gets made fun of for being so darn incompetent when it comes to handling snow.  We cancel school at the mere hint of a flurry and we abandon cars on the side of the road when there are more than two inches of snow – we straight up shut the f down.

But this is what is so great about snow in the South.  We like it this way.  As a teacher, I can tell you that the faculty is checking weather.com more often than the students are.  We are not actually that mad that our unit plan schedule has been thrown off.  And sure, we’ll be bummed in May when we lose a teacher workday to make up a snow day, but that just does not dampen the child-like magical excitement that comes from an unplanned holiday.

And that is what it is – a holiday.  The South’s inability to function when water gets too cold is actually a great thing.  I do not want to try and make it to work or push on through when I could be staying home.  It’s a SURPRISE! day off.  And it’s one that pretty much everyone gets!

We do not get too many days where the three of us stay home as a family.  Weekends are a volley of who has Bell while the other takes care of errands, weekend work, or the grasped-at alone/social time (which we always do in trade – ever so rarely together.) The grandmas have the kid during the week, so we don’t hit them up for too many weekend hours so we can have a date night.

We have a lot of snow right now by Chapel Hill standards.  I do not have the right clothes for this.  I wore my hiking boots out today, but I clearly needed either rain boots, waterproof pants, or both.  The snow was higher than my high tops – that’s way more than we are accustomed to.

Sean and I took turns sleeping in: he got up with Bell from 7-830am, at which point I got up and he went back to bed until 1030.  Are you seeing the value of this snow day yet? 🙂

We had coffee, read books, played with the doll house, made oatmeal, tried to let the dogs out (but since these dogs have lived their whole lives in NC, they peed on the deck and scrambled back inside.)

We all had fried eggs, toast and blueberries when Dada got up.  It then took us 30 minutes or so to bundle up to go outside.  Bell was dancing by the door in between every layer of clothes I put on her.  She was so impatient to go out.  First tights, then waffle thermal jammies, then socks, then a long sleeve shirt, then a sweater.  Then, her penguin Halloween costume (see – we really don’t have real winter clothes!) then boots, scarf, hat, gloves, jacket. She continued to jump up and down and attempt the door knob while I went through the same routine with my own clothes – tights, two pairs of socks, jeans, boots…

Meanwhile, Sean was getting out all of his old snowboarding gear and layering that on.  We have been together for 7 years.  I have never seen him snowboard, but he does wax nostalgic about it occasionally. He was determined to go down the tiny hill on our street.

Bell made it one step into the snow, which went up past her boots, and she was DONE. She wanted to be carried.  She is heavy in all those layers!

We tried to fashion a sled out of the storage container that held the snowboarding gear and put her in that, but as illustrated below, she was not having it. 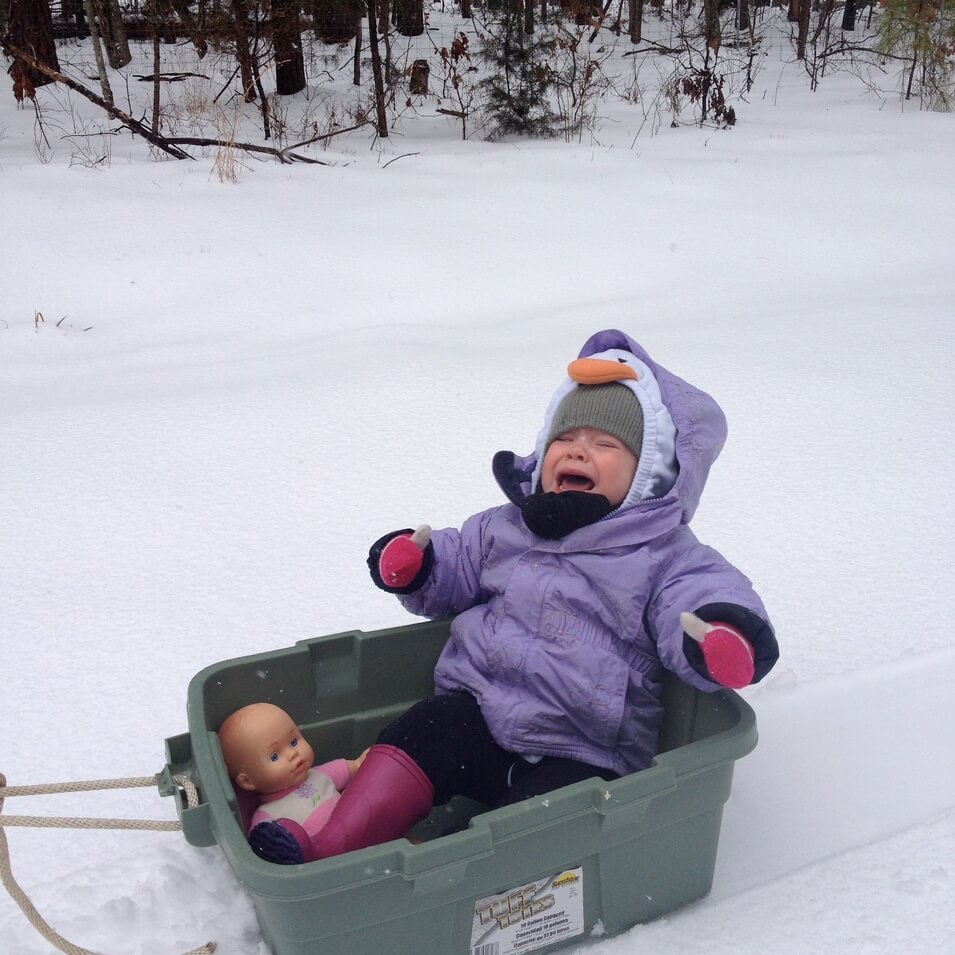 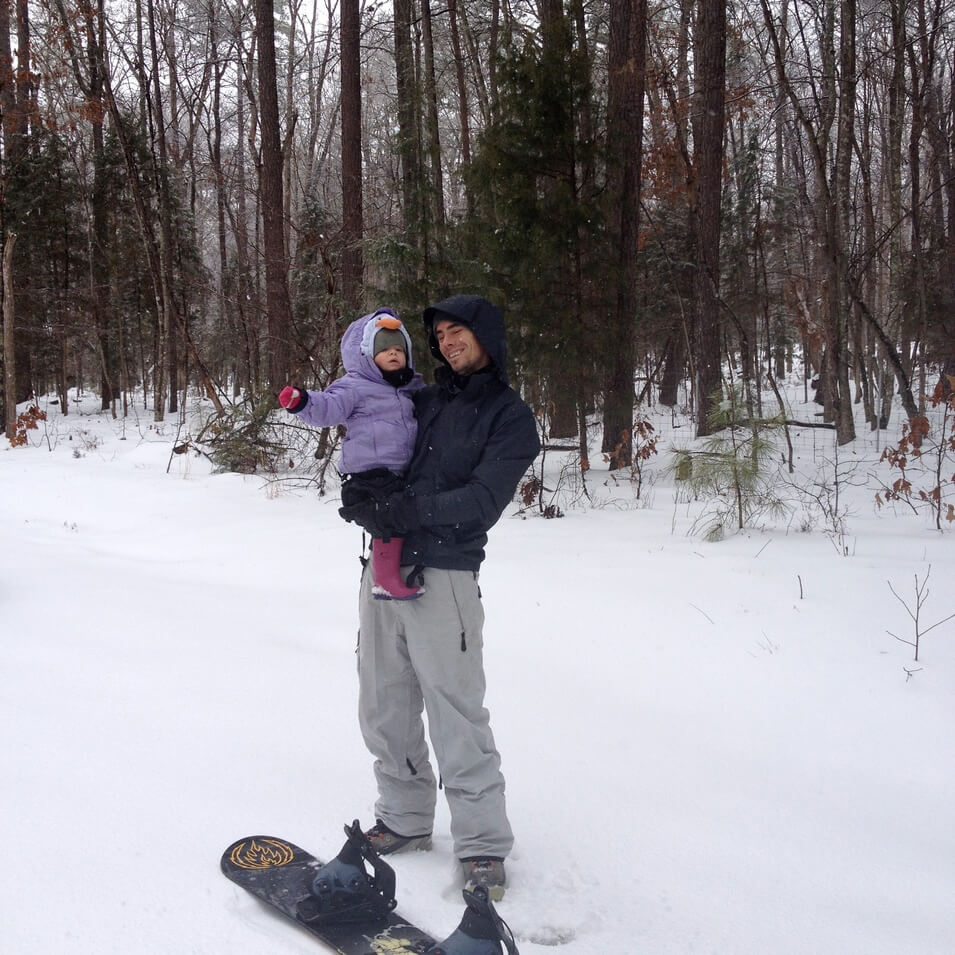 Sean attempted the hill – but it was not steep enough and he kind of just scooted himself down.

Then, he was kind enough to pull Bell and me on the snowboard, which she tolerated. My bum eventually got too wet hanging off either side of the board, but it was pretty cool while it lasted.

All in all, we were only outside for 15 -20 minutes – a fraction of the time it took us to get dressed and undressed for it. But it was worth it.

By 4pm, we were all a little stir crazy.  And though we didn’t stay outside as long as Penn and Kim Holderness’ family did, I still think their Snow Day video pretty much sums up how we were by late afternoon. True fact: I remembered to get wine at the grocery store the day before, but we had to stop on our TWO HOUR (12 mile) trek home in the snow yesterday to get milk and eggs.

So no, we can’t drive in the snow (except for my husband who mentioned a number of times during yesterday’s commute that he was born in Colorado), but I like it that way. Unlike the Holderness video, I was thrilled to get that phone call that school was cancelled again today. But does anyone have any suggestions for toddler games other than “Help Mommy Fold Laundry – no, no, no, wait – don’t throw that on the floor; I just folded it!”